This lepine harbinger will be a part of Martian Toys' Crew Zero One show at Toy Con UK on April 9, 2016. The show features an international lineup of artists, all working on Quiccs' resin TEQ63 platform. 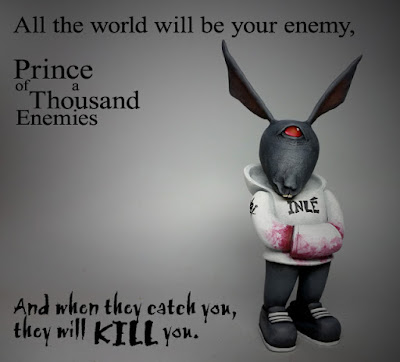 I don’t normally like going into too much detail explaining the things I create. It’s really a personal preference regarding art in general. I feel that if you have to write a dissertation so that people “get it,” then maybe your art has failed, or maybe you’re trying to hold on to your creation too tightly.
That said, I keep feeling like I need to explain a bit about the Black Rabbit I just finished for the Crew Zero One show that Martian Toys is hosting at Toy Con UK. I suppose that’s one of the shortcomings of my design. My visual promotions probably make it worse.
A significant part of what goes into Infinite Rabbits is inspired by horror & monster movies, books, legends, etc. There can be a bit of gore & implied violence. But this one is a bit different, and for whatever reason I don’t want it to be misunderstood -- both for those who understand the allusion I am making, and for those who don’t.
When I came up with this idea, it made sense in my head. For me, it is representation of the duality of the Black Rabbit in the mythology built by Richard Adams. It’s a balance and contrast between the fear of death and the idea of a guide for the transition between two worlds at that moment of death. There is a fear of the Black Rabbit as an end, as something unknown, foreign, and uncomfortable. So in that respect I obviously didn’t want something “cute.” I wanted to create something that would make the viewer feel uneasy. At the same time, I wanted to present an aspect of serenity and comfort. I thought the body of the TEC63 platform I started with (the theme of the show) really showed that. I like that there’s yet another layer of ambiguity in that, though -- is he confidently relaxing after discharging his duties, or do they weigh heavy on his tired shoulders?
The colors & the design are all meant to work with this concept. I wanted to stick with the three color pallette because it emphasizes both aspects. The bloody hands are not intended to represent instruments of death, but rather those of comforting the dead and dying -- put into the pocket like a sympathetic doctor or emergency worker after a long day of not just saving lives, but of facing and comforting those who are at the end of their lives. The Black Rabbit is a spiritual guide who has to face those who are tired or suffering, and help them through a terrifying journey out of the only body and mind that his wards have known.
I’m a little self conscious about making a big deal about one small sculpture, inspired by a book & film about rabbits, going to a designer toy show where it will undoubtedly be lost in a sea of superior work. But I frequently put a lot of thought into my little creations. Maybe this one is a little different since death has surrounded me, my family, my home, and my heart for the past year and a half. It is also a collaboration with a partner that was never consulted -- and I want to respect what he has created and not misrepresent it.
Adams’ story is full of death, often violent. But it is not one that glorifies death and violence. And I don’t want to be mistaken for doing that either. Which is why I am explaining all of this.
Posted by Infinite Rabbits at 10:35 AM